I've always been unhappy with the mainsheet rigging at the clew of the 5.5m2 blokart® sail.

I'm a big guy so I tend to sail with the 5.5m2 sail in higher winds than most people; I also use a pretty stiff mast most of the time.
Adding to the problem, I have pretty severe tendonitis in my elbows, so gripping and sheeting-in hard can become painful pretty quickly.

There are two problems I set out to remedy:

I've been trying to think of a (legal) way to move the block on the sail up and back, while moving the location where the end of the mainsheet terminates forward. Ideally you would like to have the pully-whip block "nest" between the forward block and the attachment point.

What I came up with is to slide a 3/8" (9.5mm) diameter rod into the loop where the original block attaches to the foot of the sail and tie the other end of the rod to the end of the boom. This gives me a way to hang the block and the end of the mainsheet anywhere between the two points.

In my first test, I used an aluminium bar I had lying around. You can see it bends a bit even without any wind-load.
In the "mark 2" version I used something with a larger cross-section to eliminate the bending.
The "mark 3" version is almost identical to the original test, but with a 10mm dia. pultruded carbon fiber rod that I got on E-Bay for $10.

One thing you can't see in the photos and video is how much harder I had to pull on the mainsheet with the original rigging.

In all fairness, the force in the stock system increases dramatically as you get near the fully sheeted in point (as you would expect given the geometry). Once the boom was out about 12" (30 cm) the sheet force became similar to the protoype's.

The new mainsheet system now has a few hours of sailing on it, including some time in near overpowering conditions.
No problems so far. 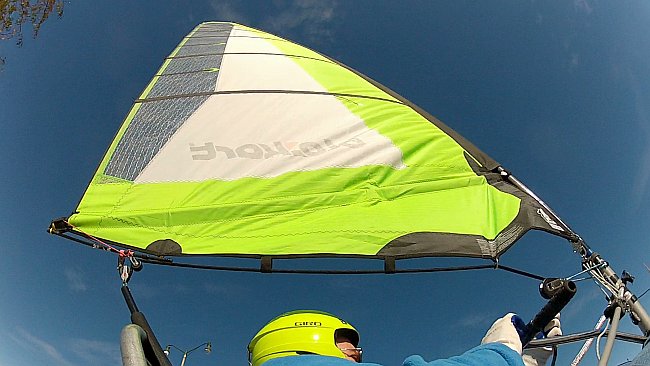 Here are a short video sailing with the new sheeting sytem in wind gusting over 15kn:

The 10mm dia. pultruded carbon fiber rod arrived last week and I used it for the "mark 3" prototype.

I think this may be a "keeper". There was very little flex while sailing. Total cost (not including the Nautos blocks): about $13. 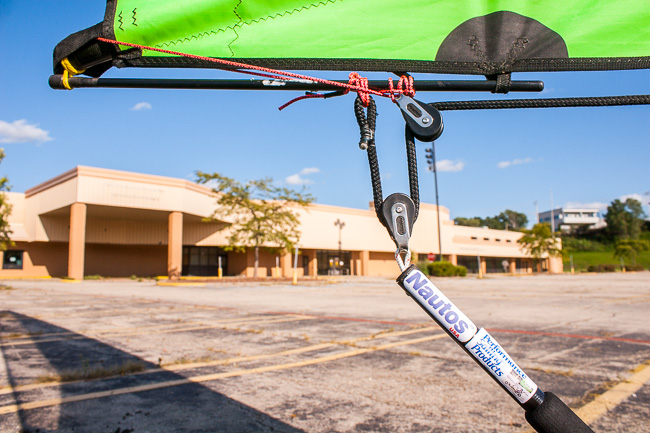 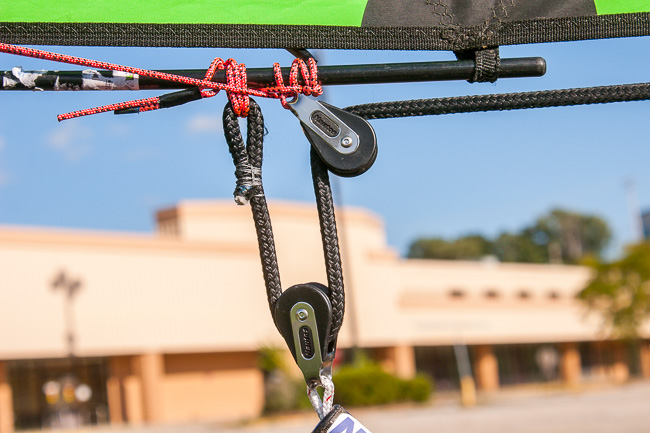 Here's a very brief video of the system in action. The wind is about 10mph (4.5m/s):
(at about 15 seconds into the video you can see me recover from a sharp hike)

I was pretty sure the 3/8" (9.5mm) aluminum rod wouldn't hold up to real sailing forces, so I made the "mark 2" prototype from some thin-wall aluminum square tubing I got at the local hardware store. It's a bit clunky and the block is a bit lower than it would be with a smaller support, but it lets me sail with the new geometry without waiting for any new parts.

Everything worked great. The sheet was much easier to pull and the sail-shape looked pretty much unchanged from stock. 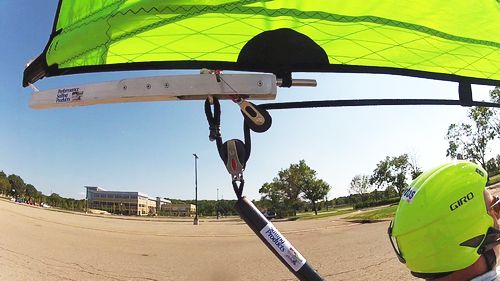 Here are some photos of the 3/8" (9.5mm) alumium rod first prototype. The block is held in position fore/aft by a line running to the end of the boom. The mainsheet end is free floating.

You can see the difference between the new and original rigging in the photos below.
For a better sense of the difference, look at the larger image below; you can switch between the two rigs by clicking on it. 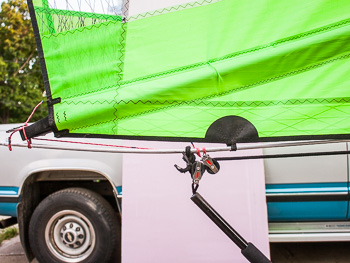 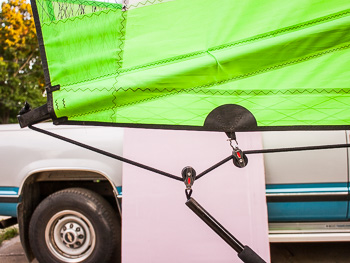 Click on the image to switch between the original and protoype rigging. 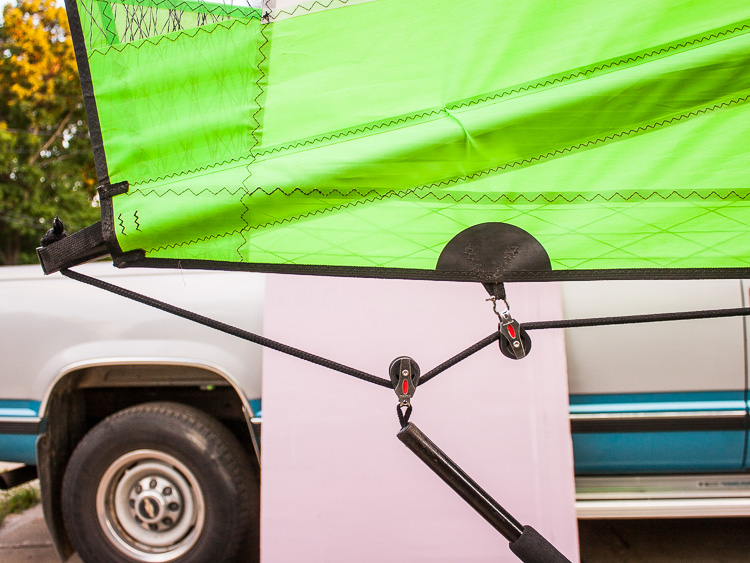